Actemra Injuries Underscore Opioids Aren’t the Only Drugs to Fear

Actemra injuries continue to be reported, while federal regulators and policymakers focus on dangers of other medications. Just a few months ago, a White House panel declared the epidemic of opioid abuse and deaths a “national public health emergency,” which is a designation typically reserved for natural disasters. 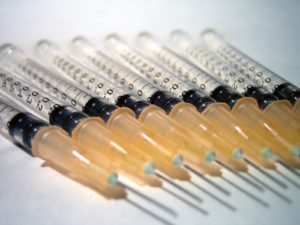 While it’s true opioid abuse is extremely concerning – as an estimated 4 million Americans use opioids and an average of 142 people die daily from overdoses – these issues have eclipsed persistent and serious issues pertaining to other drugs, like Actemra.

Last year, STAT News conducted an in-depth report revealing 1,128 people who had reportedly died after taking the intravenous rheumatoid arthritis drug since it was approved in 2010. However, the agency has shied away from asserting Actemra was causal in those deaths. Even though this is the agency in charge of serving as a watchdog to the safety of prescription medications, it isn’t taking steps to verify those reports, STAT noted. Still, in looking at the individual reports, many of the physicians who submitted those complaints indicated their belief there was no other causal factor that could serve as an explanation. They included cases of fatal heart attacks, brain bleeds and pancreatitis. While many people are aware of the potential danger posed by opioids, fewer know about the risks of seemingly benign medications like these.

To further illustrate, consider a 2013 analysis of data by the National Ambulatory Medical Care Survey, which found that NSAIDS (non-steroidal anti-inflammatory drugs like ibuprofen) were used by 95 million patients who took at least one medication for chronic pain. Many people believe these drugs are perfectly safe, but they have been associated with cardiovascular risks, damage to the digestive tract lining, kidney failure, ulcers and liver failure.

Patients with rheumatoid arthritis often suffer from severe and ongoing pain as a result of the condition, and may take these medications in addition to Actemra, which means they may be at even higher risk.

Attorneys for Actemra injuries patients know the primary issue in these cases is that the manufacturer, Genetech, a subsidiary of pharmaceutical company Roche, reportedly failed to disclose the potential risk for heart attacks, strokes, heart failure and other problems. This is despite the fact that several companies producing competing drugs do list these potentially deadly side effects. The failure to warn patients is the cornerstone of many Actemra lawsuits.

Meanwhile, a review by the U.S. Government Accountability Office two years ago found that the FDA lacks readily accessible data that would allow it to track safety and make sure companies are marketing these drugs appropriately. The FDA has created a system a decade ago called the Sentinel Initiative, which scours insurance and medical records for information that might help it identify risky medications. However, after spending more than $200 million on the program, it’s still not clear this monitoring system is adequate in ferreting out the risk of these drugs – prescriptions that are already in peoples’ medicine cabinets. Records from the program have reportedly only been used to revise two drug warning labels, according to STAT.